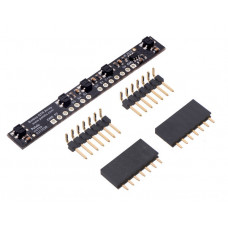 This reflectance sensor module is designed specifically for use with the Balboa 32U4 balancing robot. It features five IR LED/phototransistor pairs that are great for identifying changes in reflectance on the ground directly underneath the Balboa (like detecting or following a black line on a white background). The sensor array offers dimmable brightness control, and each sensor provides an independent output that can be measured with a digital I/O.

The 5-Channel Reflectance Sensor Array for Balboa provides an easy way to add line sensing to the Balboa 32U4 Balancing Robot. It features five separate reflectance sensors, each consisting of a dimmable IR emitter coupled with a phototransistor that responds based on how much emitter light is reflected back to it. The array is intended for Balboas assembled with 80×10mm wheels that are operating in upright (balancing) orientations.

The reflectance sensor array ships with all of the components you need to connect it to a Balboa 32U4 control board:

The sensor board can be mounted to the Balboa so that it aligns with the center axis of the chassis or the edge of the chassis, which might make following a line easier (since the sensors will be farther forward when the Balboa is upright). How the included right angle headers are connected to the sensor board determines whether the board will be center- or edge-aligned. See the pictures below for how to position the header pins for each mounting option.

The array uses the same sensor modules as our QTR reflectance sensors and has the same principle of operation as the RC versions, for example, the QTR-MD-05RC. The typical sequence for reading a sensor is:

These steps can typically be executed in parallel on multiple I/O lines. Because this array works like our other QTR sensor boards, you can use it with our QTR Arduino library, which provides methods for controlling the emitters, calibrating the module, and reading the individual sensor values. Keep in mind that how you mount your sensor will determine which I/O lines on the Balboa you are connected to. You can read the silkscreen markings on the sensor board and the Balboa to determine which sensor is connected to which I/O line.

With a strong reflectance, the decay time can be as low as a few microseconds; with no reflectance, the decay time can be up to a few milliseconds. Meaningful results can be available within 1 ms in typical cases (i.e. when not trying to measure subtle differences in low-reflectance scenarios), allowing up to 1 kHz sampling of all sensors. If lower-frequency sampling is sufficient, you can achieve substantial power savings by turning off the LEDs. For example, if a 100 Hz sampling rate is acceptable, the LEDs can be off 90% of the time, lowering average current consumption from 125 mA to 13 mA.

The sensor array maintains a constant current through its IR emitters, keeping the emitters’ brightness constant. The emitters can be controlled with the board’s CTRL pin.

Driving the CTRL pin low for at least 1 ms turns off the emitter LEDs, while driving it high (or allowing the board to pull it high) turns on the emitters with the board’s default (full) current, which is 20 mA. For more advanced use, the CTRL pin can be pulsed low to cycle the associated emitters through 32 dimming levels.

We are working on adding an easy way to access the reflectance sensors to the Balboa 32U4 Arduino Library. In the meantime, you can interface with the sensors from your Balboa code using our QTRSensors library and instantiating a QTRDimmableRC object according to one of these examples:

2. Module is intended to be powered by the Balboa's 5V line.

3. With all LEDs on at max brightness setting.