Appcelerator Titanium: Up and Running 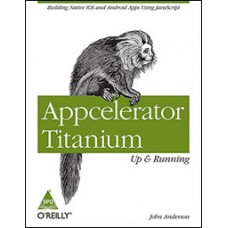 
Build native apps for iOS, Android, and Blackberry from a single JavaScript codebase with Appcelerator Titanium. This guide gets you quickly up to speed on this amazing framework and shows you how to generate cross-platform apps with 100% native controls. You’ll also learn the advantages of using Titanium when you want to create an app for just one native platform, rather than struggle with Java or Objective-C.

Fast-paced and full of examples, this book helps you build your first project with Titanium Studio, and then takes you through the steps necessary to build complex data-bound apps.

John Anderson always tells people that he feels like computers picked him, and not the other way around. While in grade school he walked into a Radio Shack, got his first look of a TRS-80 and fell in love. From that point on, computers and programming was the main focus in his life. All he could afford was the manual, so that's what he bought and started learning about programming. He has stayed with that model of learning about new technologies by getting a good book and learning about a new topic. He’s been programming computers for about 20 years now, starting as a Customer Support Rep, getting his first programming job and working his way up. When the Internet got popular, he jumped onto that as the Next Big Thing and his career built on that for over 10 years. A couple years ago when a similar phenomenon was happening in Mobile, he again took to the books and started building his own mobile apps and immersing myself in all things mobile. He has apps in Apple's App Store and the Android Marketplace, some of which were done with Titanium.