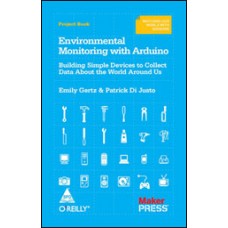 After the devastating tsunami in 2011, DYIers in Japan built their own devices to detect radiation levels, then posted their finding on the Internet. Right now, thousands of people worldwide are tracking environmental conditions with monitoring devices they’ve built themselves. You can do it too!

This inspiring guide shows you how to use Arduino to create gadgets for measuring noise, weather, electromagnetic interference (EMI), water purity, and more. You’ll also learn how to collect and share your own data, and you can experiment by creating your own variations of the gadgets covered in the book. If you’re new to DIY electronics, the first chapter offers a primer on electronic circuits and Arduino programming.

Emily Gertz is a correspondent for OnEarth Magazine. She has been covering DIY environmental monitoring since 2004, when she interviewed engineer-artist Natalie Jeremijenko for Worldchanging.com. Her latest, on citizen radiation monitoring in Japan, was published by OnEarth Magazine in April 2011. She has been hands-on with internet technologies since 1994 as a web producer, community host, and content strategist. Her articles have appeared in Grist, Dwell, Scientific American, Popular Mechanics, and more.

Patrick Di Justo is a contributing editor at wired magazine, where he writes the magazine's monthly what’s inside column, and the author of The Science of Battlestar Galactica (Wiley, October 2010). His work has appeared in Dwell, Scientific American, Popular Science, The New York Times, and more. He has worked as a robot programmer for the Federal Reserve, and knows C, C++, Java, and Processing. He bought his first Arduino in 2007.