EasyVR 3 Plus Shield for Arduino 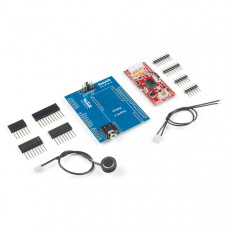 Do you make time to talk to your Arduino? Maybe you should! The EasyVR 3 Plus Shield is a voice recognition shield for Arduino boards integrating an EasyVR module. This kit includes the EasyVR 3 Plus Module, the Arduino Shield Adapter, microphone, and headers. With all of these parts, everything has been provided to you to get up and running in a short amount of time with minimal soldering!

EasyVR 3 Plus is a multi-purpose speech recognition module designed to add versatile, robust and cost effective speech recognition capabilities to almost any application. The EasyVR 3 Plus module can be used with any host with a UART interface powered at 3.3V – 5V, such as PIC and Arduino boards. Some application examples include home automation, such as voice-controlled light switches, locks, curtains or kitchen appliances, or adding “hearing” to the most popular robots on the market.

Note: Please be aware that the EasyVR 3 Plus Shield for Arduino does not come pre-assembled and will require some soldering and assembly before operation.