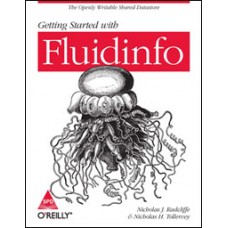 Imagine a public storage system that has a place online for structured data about everything that exists—or that could exist. This book introduces Fluidinfo, a system that enables you to store information about anything, real or imaginary, in any digital form. You’ll learn how to organize and search for data, and decide who can use, modify, and extend what you’ve contributed.

This guide demonstrates Fluidinfo’s potential to create social data, with facilities that encourage users and applications to share, remix, and reuse data in ways they may not have anticipated. You’ll learn how to use tools for reading and writing data, and how to use Fluidinfo in your own applications by working with its writable API and simple query language.

After gaining a Ph.D. in Theoretical Physics at Edinburgh University,he joined the newly forming Edinburgh Parallel Computing Centre in 1990, where he led a group that used high-performance computing to tackle business and commercial problems. In 1995, with three colleagues he founded Quadstone Limited, a VC-backed company that built the Decisionhouse suite of analytical and visual marketing tools for large-scale data analysis. He served as CTO of Quadstone until 2007, when he left to form Stochastic Solutions Limited, a consulting firm that also develops and markets the Artistssuite of analytical software. Radcliffe also serves as a Visiting Professor at the University of Edinburgh, attached to the Operational Research Group, and has published numerous scientific and technical papers as well as the bookSustainability: A Systems Approach, written with Anthony Clayton for WWF (the former World-Wide Fund for Nature).

Radcliffe's connection with Fluidinfo dates back to the late 1980's when he and Fluidinfo's founder, Terry Jones, both researched genetic algorithms, sharing a common interest in representation issues. Radcliffe has been a friend of and advisor to the Fluidinfo company since its inception. Radcliffe wrote the open-source Fluidinfo Shell (Fish) software for interfacing with Fluidinfo, writes a blog, About Tag, that discusses representation issues as they affect Fluidinfo, and maintains several web services for accessing Fluidinfo. He also writes a separate blog on analytical marketing, The Scientific Marketer.


Nicholas H. Tollervey is a classically trained musician, philosophy graduate, teacher, writer and software developer. He's been programming since 1984 when he taught himself BBC Basic at junior school. He currently works at Fluidinfo where he gets to do all sorts of fun and exciting things like trying to change the world of linked data. Prior to working as a developer Nicholas was a senior teacher in an inner-city state secondary school in the UK. He has extensive experience working with students of all ages and abilities and still indulges his passion for teaching and learning by helping to run the London Python Code Dojo. A graduate of the Royal College of Music (Nicholas used to play professionally) he also has an MA in Philosophy of Education and financed his MSc in Computing by writing reviews and articles for the UK edition of Computer Shopper.