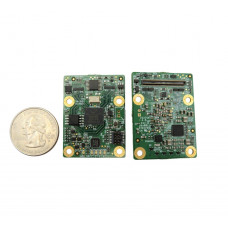 OAK-SoM-IoT is an embedded variant of OAK-SoM that includes a 128MB NOR flash, and boot-switch capabilities such that it can be booted over USB (for use with our Python API) or set to boot out of NOR-flash, for communication with microcontrollers over SPI.

The key difference between OAK-SoM-IoT and the standard OAK-SoM is that the latter requires a host processor, running Linux, Mac, or Windows to operate, whereas this module can boot out of NOR flash - allowing SPI communication with microcontrollers which may be running no operating system at all (bare metal C or C++ code).

This module is included pre-mounted on the OAK-D-IOT-40, which is our embedded DepthAI reference design.

Important Note: This embedded variant is in initial integration testing: The SPI interface support, although initially available, is in initial testing and is not feature-complete. Some initial/proof-of-concept example code for interfacing the OAK-SoM-IoT with the ESP32.