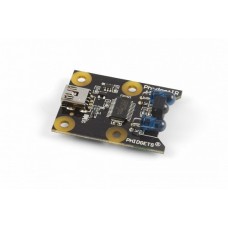 Send and receive IR data with this Phidget. It can learn and reproduce signals from common devices like your TV remote.

You can use the PhidgetIR to control devices with remote control input - such as your TV or Blu-ray player, from your computer by having the PhidgetIR transmit remote control codes. Your application can learn the signals from arbitrary remote controls. The learned code can be retransmitted and will function just as if you were pushing the same button on the actual remote. You can also control your computer or Phidgets by recognizing a signal from any remote and using it as an event in your application to trigger some action.

The PhidgetIR can send and receive data encoded in various fashions as pulses of infrared light. The various encoding that the PhidgetIR supports are grouped under the general term ‘Consumer IR’ or CIR. CIR is generally used to control consumer products such as TVs, Blu-ray players, or speaker systems. with a wireless remote control, but in general can be used for any application that needs to transmit low speed data wirelessly.

CIR is a low speed protocol - commands generally contain no more then 32-bits of data with a bit rate of at the most 4000 bits/second, but usually much less. There is no concession for anti-collision, so only one code can be transmitting at any time. Transmission distance depends on the power of the transmitter, but needs to be line of sight - though generally this can include bouncing off of walls and ceilings.

CIR data is transmitted using a modulated bit stream. Data is encoded in the length of the pulses / spaces between pulses, of IR light. The pulses of IR light are themselves modulated at a much higher frequency (usually ~38kHz) in order for the receiver to distinguish CIR data from ambient room light.