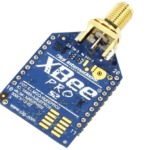 ZigBee® wireless communications is a popular standard among our customers.  The wireless protocol acts as a long-distance wireless serial port, allowing wireless operation with no modification to software.