chipKIT PGM Programmer/Debugger for use with Digilent chipKIT Platforms 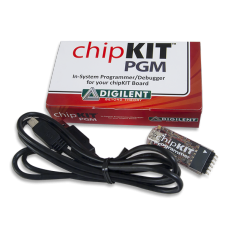 The chipKIT™ PGM is a simple, low-cost module that supports in-system programming and debugging of applications written for Microchip®PIC-based microcontroller boards.

The chipKIT PGM is designed to work with the MPLAB® and MPLAB X development environments available from Microchip. This allows the chipKIT boards, for example, to be used as a more traditional microcontroller development platform using the professional tools available from Microchip. While the PICkit™3 programmer can generate programming voltages needed to program all Microchip PIC devices, the chipKIT PGM can only program devices that are programmable with 3.3V programming voltage. Further, the PICkit3 can source a small amount of current to provide power to some boards being programmed. The chipKIT PGM does not provide power to the board being programmed.

The chipKIT PGM can also be used to enable in-system debugging of sketches developed using the MPIDE development environment.